When a child or an adult with a developmental disability is unable to live with their family of origin, Envision links them with screened, trained and certified foster families for therapeutic foster care, shared living and respite services. During their stay, they have their own bedroom and are surrounded by their cherished possessions. Most importantly, they are treated like a valued member of the family and are supported in reaching their goals and aspirations. Our foster care program is available to individuals who are eligible for services through county boards of developmental disabilities, county departments of child protective services and to those funded through Medicaid or private pay. 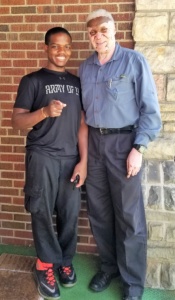 George Jackson probably isn’t what most people expect when they hear the term “foster parent.” George recently lost his beloved wife to cancer and is making the difficult transition from having a spouse to being a widower. He has his own health issues, too, including vitiligo – a progressive skin condition characterized by patches of the skin losing their pigment.

Yet, in spite of being older, alone and dealing with personal challenges – George is a foster parent to “MJ.”  George, a retired social worker, has known MJ since he was 8. Now a teenager and ready to spread his wings, MJ is still learning valuable lessons and life skills from living with George.

“MJ, like many boys who come from single-parent homes, often has a big chip on his shoulder. I was like that as a kid, too, — so I understand how he feels and I’m usually able to get through to him,” said George. He assigns household chores to MJ and regularly dispenses guidance for avoiding chaos: If you don’t make a mess, you don’t have a mess to clean up. Make a habit of putting things where they belong. Lay your clothes out the night before so you’re not rushed in the morning.

When things get a bit frustrating, Jackson applies a lesson he learned while coaching youth football for 34 years. “Kids hear what you tell them, but as one boy on the team told me: ‘I heard you but I wasn’t ready to do what you said.’ That’s how this goes. We can only plant the seed. We can’t control the timing for it to bear fruit,” said George.